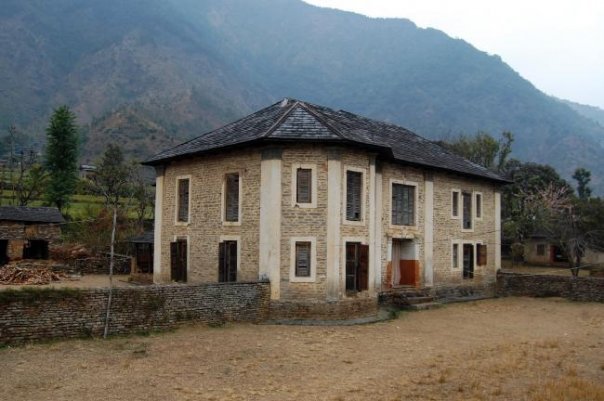 The historical Galkot Durbar, the palace of the then king of Galkot principality, is gradually becoming dilapidated for want of repair and maintenance. It is losing its grandeur.

Galkot was one of the powerful kingdoms among the 24 principalities before the mid-18th century when King Prithvi Narayan Shah of Gorkha initiated the unification campaign of Nepal.

The palace which was painted white has started discolouring due to rain and sun. The sorry condition of the Durbar greets from the gate itself. The walls, pond, garden, granary, resting place and a temple within the Durbar’s premises are also becoming decrepit. The steps and stairs inside the palace have also started falling off.

The pond is sans water and its beauty. There are no flowers blooming in the palace garden. The doors and verandahs have rotten. The rooms and walls have become disfigured and lost the colour. The roof of the palace is also decrepit.
The palace located at Harichaur of Galkot municipality-5 and spreading over nearly five ropanis area wears a deserted look. This heritage structure was in its prime until 2017 BS. Members of the Galkot king’s family used to live in this palace until then and they had taken good care of their ancestral property.

The first people-elected government in 1959 decided to abolish the then extant principalities. It was Bharat Bam Malla himself who had taken a proposal for the same in the Council of Ministers that time. Malla, who inherited the Galkot principality, was also elected to the parliament in 2015 BS (1959).

Even after the abolishment of the Galkot principality, members of the then Royal family used to reside in the place and own up the responsibility of its care and protection.

As time passed, new systems were introduced and implemented in the country. The palace turned old.

King Bharatbam passed away in 2039 BS. The responsibility for the palace protection got shifted to Madhavbam, the member of the third generation who was slain by a rebel side during the decade-long (1996-2006) armed conflict in the country. This was the case of 2059 BS (2006). Madhavbam was associated with the teaching profession at the time. With this incident, the Malla Family was displaced from here and migrated to Kathmandu, leaving no one behind there for the protection of the palace.

Bad days for the place began. According to Madhabam’s son Manjeshbam, all historic documents and other objects were looted at the time.
Now, its possession is with Manjeshbam’s mother Saroja Malla. During their occasional visits to the Galkot, the family spends time in the place. As said by Manjeshbam, they are seeking to renovate the place as they are serious about its proper protection, but it is being delayed due to numerous reasons.

He pledged to work out on the renovation plan.

The two-storey palace dating back to 1989 BS is made of stones, bricks and timbers. It has a sufficient open space. Structures used for different administration purposes still stand here. There is a temple of Hindu God Narayan and a huge garden behind the palace. Regular puja is conducted in the temple.