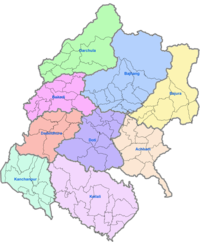 The graft cases are found increasing in Sudurpaschim state. The annual report of the Commission for Investigation of Abuse of Authority (CIAA) Kanchanpur has revealed growing graft incidents in the state.

Most of the complaints were found associated to financial irregularities and sub-standard development works.
As many as 610 among the cases registered were dispensed and remaining 667 are under investigation, the report stated.

The anti-graft body report noted 63 corruption cases reported in the fiscal 2075/76 and 224 of the fiscal 2074/75 were comprehensively studied and necessary actions were taken while 245 cases were sent to the concerned agency for actions.

Chief Khatiwada said corruption has gone up at local level with the increase in power and authority brought out by federalism.

Among the recommendations furnished by the CIAA are formulation of anti-corruption and good governance friendly laws, formation of state public service commission, appointment of human resource based on merit system, land management and record-keeping of public land, enforcement of code of conducts of people’s representatives and employees, utilization of resources and structures of revoked government offices, control of double budget appropriation and payment and improvement in public construction and procurement process.

The CIAA office has recommended the local government to maintain impartiality and transparency in service delivery, monitoring users’ committee for legitimate and quality performance, bringing reforms in school management and prevention of misuse of social security allowance, among others.