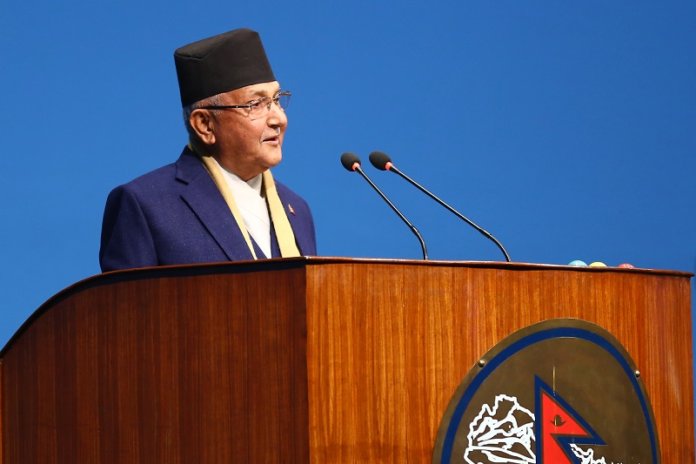 Prime Minister KP Sharma Oli has asserted that 6-km roadway was blacktopped everyday following the formation of the present government.

Addressing the House of Representatives meeting upon the completion of two years of the present government, PM Oli said, “During this period, 125 tuin were displaced; country became self-reliant on agriculture- fishery and meat products; Tatopani roadway damaged by the 2015 Earthquake was reconstructed and linked to the export-import network; conducive atmosphere was created for foreign investment; export increased by 26.1 percent and import decreased following the trade diversification.”

According to the PM, 88 percent of the total population of the country has been ensured electricity. With the increased production of electricity, Nepal began exporting it. These are tremendous achievements in energy sector. Favourable atmosphere was created to export electricity to India and Bangladesh, he argued.

Moreover, the PM reminded that the plan to construct interstate electricity transmission line from Lapsephedi-Ratmate-Damauli-Hetauda-Palpa-Butwal and Gorakhpur under the MCC compact would be longterm importance, ensuring milestone in the utilization of huge potential of Nepal’s hydropower electricity. “With the completion of this pride project in coming five years, Nepal’s economy with improved foreign trade and energy utilization will undoubtedly bring huge change,” he underscored.

The PM further informed that although there is poverty, hunger has ended; none died of cold wave this past year; reconstruction of the runway of only international airport was done in 40 years. Upgrading of other domestic airport was also intensified. The petroleum pipeline was completed on time; reconstruction drive after the quake was accelerated; all Nepalis’ access was ensured to mobile phone; settlement was raised for those suffering in the tornado occurred at Bara and Parsa.

In the address, PM Oli said, “Students’ enrollment rate was near 100 percent. Drop out rate has dropped. The health insurance has been expanded to 39 districts from 15 districts. Nepal has been the first country in the South Asia as the open defecation free country. Construction of landfill sites at Bancharedanda of Nuwakot for the management of Kathmandu Valley garbage was expedited. These all are achievements.”

He warned that anyone involved in corruption will be brought to book. Government is devoted to retrieve the lands encroached in different places.

PM Oli shared before the lawmakers that revenue leakage has reduced much. As many as 795 employees and firms included involved in fake bills and hundi have been filed cases.
Investigation and action have been forwarded against those involved in the Lalita Niwas land scam. He informed that it was already made public that the tenants were provided some 174 ropanis of land owned by Nepal Trust against Nepal Trust Act 2064 in 2069 BS.
—