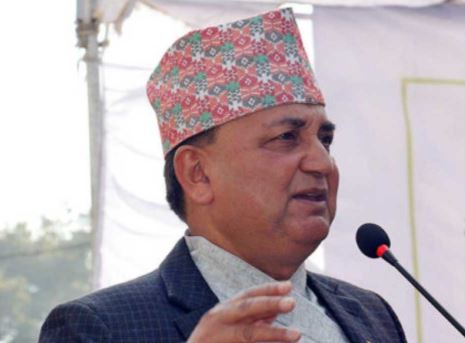 He is also scheduled to inspect the Nepali Army barrack in the district.
Home Ministry has directed the district police office through the district administration office and the police headquarters to manage security for DPM Pokharel’s visit, it has been said. DPM Pokharel is accompanied during the visit by a 10-member team including joint secretary at the Ministry of Defence and high ranking officials of the Nepal Army.

This is the maiden visit to Darchula by Minister Pokhrel after he assumed the post of Deputy Prime Minister. Prior to this, he had been here in 2053 BS in his respective capacity as the then CPN (UML)’s the central member. He is scheduled to stay here tonight following the inspection to the barrack and inauguration of the Darchula festival, said Chief District Officer Yadunath Poudel.

The Deputy Prime Minister and Minister for Defense will make an aerial inspection to the Byas area. Security arrangements have been tightened due to the visit schedule.
It may be noted that the latest political map of India presents Nepal’s territory Kalapani, Lipulek and Limpiyadhura as Indian parts and India’s move was protested at home and the government had claimed the ownership upon encroached territory.

Lately, homework has begun to give the responsibility of implementing the Darchula Tinker Road Construction Project extending from Darchula to Kalapani to the Nepal Army.